You may be surprised to learn that most people have one leg that's just a bit longer than the other, or one foot that may be slightly larger. But for children with significant limb length discrepancies, the size difference between limbs can be a serious problem. There are two types of limb length discrepancies. Congenital discrepancy is when babies are born with one leg longer than the other. In some cases both legs are normal, except that one is shorter than the other. In other cases one particular part of the leg is underdeveloped or is absent. Acquired discrepancy is when babies are normal at birth, but some kind of injury happens, such as a severe fracture. The bone growth in that limb slows, which results in a leg length discrepancy that worsens as the child continues to grow. 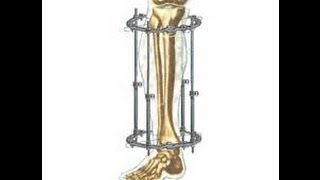 Some causes of leg length discrepancy (other than anatomical). Dysfunction of the hip joint itself leading to compensatory alterations by the joint and muscles that impact on the joint. Muscle mass itself, i.e., the vastus lateralis muscle, pushes the iliotibial band laterally, causing femoral compensations to maintain a line of progression during the gait cycle. This is often misdiagnosed as I-T band syndrome and subsequently treated incorrectly. The internal rotators of the lower limb are being chronically short or in a state of contracture. According to Cunningham's Manual of Practical Anatomy these are muscles whose insertion is lateral to the long axis of the femur. The external rotators of the hip joint are evidenced in the hip rotation test. The iliosacral joint displays joint fixations on the superior or inferior transverse, or the sagittal axes. This may result from many causes including joint, muscle, osseous or compensatory considerations. Short hamstring muscles, i.e., the long head of the biceps femoris muscle. In the closed kinetic chain an inability of the fibula to drop inferior will result in sacrotuberous ligament loading failure. The sacroiliac joint dysfunctions along its right or left oblique axis. Failure or incorrect loading of the Back Force Transmission System (the longitudinal-muscle-tendon-fascia sling and the oblique dorsal muscle-fascia-tendon sling). See the proceedings of the first and second Interdisciplinary World Congress on Low Back Pain. Sacral dysfunction (nutation or counternutation) on the respiratory axis. When we consider the above mentioned, and other causes, it should be obvious that unless we look at all of the causes of leg length discrepancy/asymmetry then we will most assuredly reach a diagnosis based on historical dogma or ritual rather than applying the rules of current differential diagnosis.

The effects of a short leg depend upon the individual and the extent of discrepancy. The most common manifestation if a lateral deviation of the lumbar spine toward the short side with compensatory curves up the spine that can extend into the neck and even impacts the TMJ. Studies have shown that anterior and posterior curve abnormalities also can result.

The most accurate method to identify leg (limb) length inequality (discrepancy) is through radiography. It?s also the best way to differentiate an anatomical from a functional limb length inequality. Radiography, A single exposure of the standing subject, imaging the entire lower extremity. Limitations are an inherent inaccuracy in patients with hip or knee flexion contracture and the technique is subject to a magnification error. Computed Tomography (CT-scan), It has no greater accuracy compared to the standard radiography. The increased cost for CT-scan may not be justified, unless a contracture of the knee or hip has been identified or radiation exposure must be minimized. However, radiography has to be performed by a specialist, takes more time and is costly. It should only be used when accuracy is critical. Therefore two general clinical methods were developed for assessing LLI. Direct methods involve measuring limb length with a tape measure between 2 defined points, in stand. Two common points are the anterior iliac spine and the medial malleolus or the anterior inferior iliac spine and lateral malleolus. Be careful, however, because there is a great deal of criticism and debate surrounds the accuracy of tape measure methods. If you choose for this method, keep following topics and possible errors in mind. Always use the mean of at least 2 or 3 measures. If possible, compare measures between 2 or more clinicians. Iliac asymmetries may mask or accentuate a limb length inequality. Unilateral deviations in the long axis of the lower limb (eg. Genu varum,?) may mask or accentuate a limb length inequality. Asymmetrical position of the umbilicus. Joint contractures. Indirect methods. Palpation of bony landmarks, most commonly the iliac crests or anterior iliac spines, in stand. These methods consist in detecting if bony landmarks are at (horizontal) level or if limb length inequality is present. Palpation and visual estimation of the iliac crest (or SIAS) in combination with the use of blocks or book pages of known thickness under the shorter limb to adjust the level of the iliac crests (or SIAS) appears to be the best (most accurate and precise) clinical method to asses limb inequality. You should keep in mind that asymmetric pelvic rotations in planes other than the frontal plane may be associated with limb length inequality. A review of the literature suggest, therefore, that the greater trochanter major and as many pelvic landmarks should be palpated and compared (left trochanter with right trochanter) when the block correction method is used.

Treatment depends on the amount and cause of the leg length discrepancy as well as the age of your child. Typically, if the difference is less than 2 cm we don?t recommend immediate treatment. We may recommend that your child wear a heel lift in one shoe to make walking and running more comfortable. If the leg length discrepancy is more significant, your doctor may recommend surgery to shorten or lengthen a leg. The procedure used most often to shorten a leg is called epiphysiodesis.

can gym help in increasing height?

Surgical operations to equalize leg lengths include the following. Shortening the longer leg. This is usually done if growth is already complete, and the patient is tall enough that losing an inch is not a problem. Slowing or stopping the growth of the longer leg. Growth of the lower limbs take place mainly in the epiphyseal plates (growth plates) of the lower femur and upper tibia and fibula. Stapling the growth plates in a child for a few years theoretically will stop growth for the period, and when the staples were removed, growth was supposed to resume. This procedure was quite popular till it was found that the amount of growth retarded was not certain, and when the staples where removed, the bone failed to resume its growth. Hence epiphyseal stapling has now been abandoned for the more reliable Epiphyseodesis. By use of modern fluoroscopic equipment, the surgeon can visualize the growth plate, and by making small incisions and using multiple drillings, the growth plate of the lower femur and/or upper tibia and fibula can be ablated. Since growth is stopped permanently by this procedure, the timing of the operation is crucial. This is probably the most commonly done procedure for correcting leg length discrepancy. But there is one limitation. The maximum amount of discrepancy that can be corrected by Epiphyseodesis is 5 cm. Lengthening the short leg. Various procedures have been done over the years to effect this result. External fixation devices are usually needed to hold the bone that is being lengthened. In the past, the bone to be lengthened was cut, and using the external fixation device, the leg was stretched out gradually over weeks. A gap in the bone was thus created, and a second operation was needed to place a bone block in the gap for stability and induce healing as a graft. More recently, a new technique called callotasis is being use. The bone to be lengthened is not cut completely, only partially and called a corticotomy. The bone is then distracted over an external device (usually an Ilizarov or Orthofix apparatus) very slowly so that bone healing is proceeding as the lengthening is being done. This avoids the need for a second procedure to insert bone graft. The procedure involved in leg lengthening is complicated, and fraught with risks. Theoretically, there is no limit to how much lengthening one can obtain, although the more ambitious one is, the higher the complication rate.
« Heel Aches What Is Mortons Neuroma »
Profile